My journey through photos

My work as a fan advocate for Orange is the New Black.

Orange is The New Black has worked its way into my heart. I fell in love with this show right from the very beginning, but I was deeply touched by the story in episode 3 “Lesbian Request Denied” directed by Jodie Foster and written by Sian Heder.

In this episode we see Burset’s backstory: That before becoming a transgender, she used to be Marcus, a firefighter, who had a wife, Crystal, and a son named Michael. The whole story wasn’t shown, but it was heartbreaking to watch what the Bursets went through. Michael struggled in dealing with this tremendous change, but Crystal displayed incredible strength and support to her husband’s decision. It was moving to watch the scene where Crystal was helping her husband, now in a woman’s body, putting on her dress. Actors Tanya Wright and Laverne Cox had me tearing up because I, too, am married to a man that I love and I am not sure if I could accept a 180 degree change like that. The chemistry was so right for this husband and wife, and Tanya conveys these flawless expressions full of emotion as a wife who’s going through this uncontrollable event and could absolutely do nothing, but accepts the fact that she now has a wife! I am hoping to see more of their story in Season 2!

I had the opportunity to interview Tanya Wright and she was amazingly nice enough to give me the time to answer some burning questions from me and her fans on Twitter!

KR: How did you get involved with such an amazing show as Orange is The New Black?

TW: I had an audition with Jen Euston, the Casting Director for OITNB. I am a native New Yorker–I had lived in LA for many years– and just returned back to NY. I was put on tape and found out I had the role a few days later.

TW: Yes, I auditioned for the role of Crystal. There were no other roles I auditioned for. My audition scenes were Episode 3 [Lesbian Request Denied] and I was completely enamored with the character and the storyline.

KR: Did you know any of the cast before the show?

TW: I knew no one before I started. After I got the role, though, I met with Jodie Foster [who directed episode 3] and Laverne Cox [who plays Sophia Burset]. We talked about the scene–the characters, their relationship– and did some blocking. I have–along with millions of others–been a huge fan of Jodie’s. When my agent called to tell me I got the part, the first question he asked me “Have you worked with Jodie Foster before?” I thought it was a strange, random thing to ask. I said, “No, but I sure as hell would like to!” Then, he stated I had gotten the role and that she was directing. I was over the moon!

KR: Will we get to see more of Crystal? (We all want to learn more about her backstory!)

TW: I have NO IDEA what the writers are planning for Crystal. When we last saw her in episode 9[F*cksgiving], she was falling for her pastor–she still clearly, though, has great, deep feelings for Sophia. They have a lot of history together and feelings don’t change necessarily because someone’s gender has changed. Love has nothing to do with gender. I’m excited to see what the writers will do and can’t wait to experience the unfolding of this storyline. It’s truly break-through in so many ways. I feel great reverence for this story and am honored to play the role.

KR: How does it feel like to be a part of this amazing cast?

TW: It’s great fun! Netflix’s model of releasing all the episodes at once has completely revolutionized the medium. You get a lot of information almost instantaneously. It’s incredible how many people binge-watched the show, even in its first week! The response has been unlike anything I’ve ever experienced, and I’ve done a lot of big shows. I am particularly gratified by people’s response the Sophia/Crystal storyline. Everyone on the show is really and truly grateful for the tremendous outpouring of love.

KR: The show has only been out less than a month and everyone has become famous overnight, what’s your thought on this?

TW: Well, for me, I’ve been acting for a while and have done many popular, critically acclaimed shows: NYPD Blue, ER, 24, True Blood. My first job was playing Theo’s girlfriend on The Cosby Show when I was a teenager. It’s the same stage we shoot Orange is The New Black! It’s kind of a full-circle moment for me. But,there is something about Orange is The New Black that is different from any other show I’ve ever done. I can’t explain it–it’s pretty extraordinary.

KR: Can you tell us about your first day on set?

TW: I tend to be very focused and quiet on set, especially before filming my scenes. My character is dealing with a lot of things, so it’s very internal for me; everyone on set is really cool and wonderful. They are very relaxed, smart, generous and creative people.

KR: Any touching stories you want to share with us from working on this show?

TW: I have deep admiration and love for Laverne Cox. I am particularly grateful to Jenji Kohan, Sian Heder and the entire writing staff. I am an actor on the show, but I have also enjoyed watching it as a viewer!

KR: There has been a huge buzz on the Internet and fans ship a lot of couples on the show such as Bennett & Daya or Alex and Piper, do you have your favorite couple?

TW: Ha! I love all the couples on the show, but perhaps my favorite is Sophia and Crystal. If Crystal had a Facebook relationship status, it would definitely be “It’s complicated!” [laughs]

KR: Are you currently working on other projects?

TW: I wrote, directed, produced and starred in a feature film called Butterfly Rising (www.butterflyrisingthemovie.com). It’s a story about two women who take a road trip to meet a medicine man named Lazarus of the Butterflies; we’re currently on the film festival circuit. I also wrote the book of the same name. I was inspired to create the project after the death of my brother. It’s my dream to take the project on the road and screen it for free for people who are grief-stricken, homeless, in prison–anyone who needs their faith redeemed and their hope restored. The butterfly is the symbol for change. The two women [Rose and Lilah] are going through a real metamorphosis and change a lot from the beginning of the picture to the end. 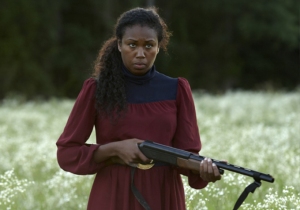 KR: When did you start acting? What have you done before?

TW: I started acting when I was a teenager! I’ve appeared on all the shows I’ve mentioned perviously. For the full list, check me out on my IMDB. I was a shy child, but always wanted to act deep down inside. I turned to writing as an outlet, but acting kept beckoning until I answered the call.

KR: Who are your role models?

KR: What was your favorite scene to film and why?

TW: The scene where Crystal helps Sophia into a dress in episode 3. It has taught me a lot about love.

I hope you enjoy this interview and check out Tanya’s other projects!